Solo performance, it will involve insight to french spectral music and Afrological forms of improvisation. Essential informations are contained in the timbre, that becomes the principle variable. The emancipation of timbre as central element to musical language has already brought several developments in musical language, as new formal articulation, new conception of musical tempo, the introduction of electronic luthiery and musical computer science and, in general, a new relationship between the concepts of sound and noise, and the threshold between them. Elia Moretti says: “I’m looking for a concept of tempo that would be accountable to movement and stops, to continuos and fragmented, to time and instant, to the minimum difference to the clock time, made by pauses, dreams, melancholia and enthusiasm. In my own efforts to move towards a more thorough understanding of the concept of rhythmic thresholds, to adapt these sound concepts to performing arts, I have found a more systematic review of the field of music perception to be useful. My expectations are to combine rhythmic threshold/perception, spectral music and afro-logical improvisation. It’s not possible to frame this approach in a particular aesthetic, but it’s a perspective of thinking, they are logical forms of musical behavior. The threshold is the context filtering all the passages. This concept comes from the anthropological concept of liminality, that shows the ambiguity caused by the intermediate passage in a ritual. The subject participating the ritual has already lost the previous state, but not yet achieved the further state, when the ritual will be completed. It’s a transitory state where identity and time are suspended. The destruction of the order creates a flow that establishes new connections, new rules.” 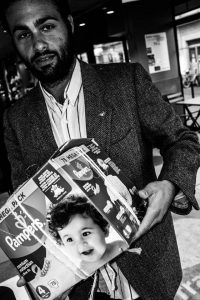